I received an envelope in the mail today that I can only describe as magical, it made my plain brown envelope seem so inadequate.  Shawn sent me 4 of her mini zines and they are really awesome.  Her design choices are just so good, I mean like these blew me away.  The content is life affirming, playful, soulful, deep, clever, and just really good.  These are the kind of zines you can flip through in a minute and then go back and study for as long as you want.

When I requested a trade with Shawn she said her zines were inadequate after looking at my blog but in all honesty her artistic skill and the quality of her work make me feel inadequate.

Just finsihed printing, folding, and stapling some copies of my newest, Unbridled Enthusiasm #3.  My first two UB zines were no word photozines, and while I kind of like doing that I also want to write.  After trading with Ken Bausert and reading his “Chronicles” I was inspired to make a perzine with some personal stories, news, along with some photos.

I’m really happy that I was able to include a couple of fun pieces with my wife and interview “The Darkroomist” for a piece of film photography.  I’m really happy with this and also with the excellent output of my new laserjet 4300!

The zine is available for trade, or I can sell you one for 3 dollars. 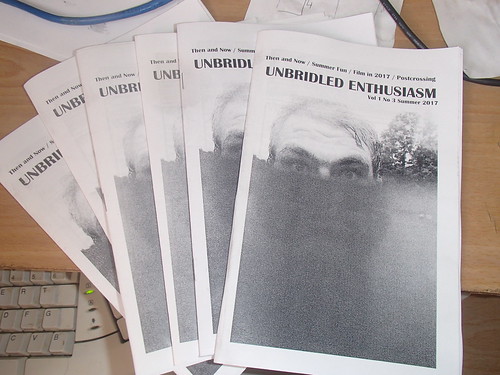 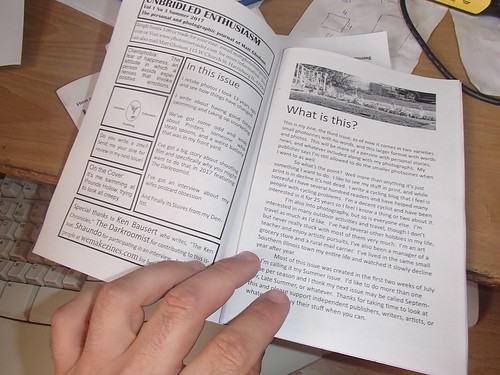 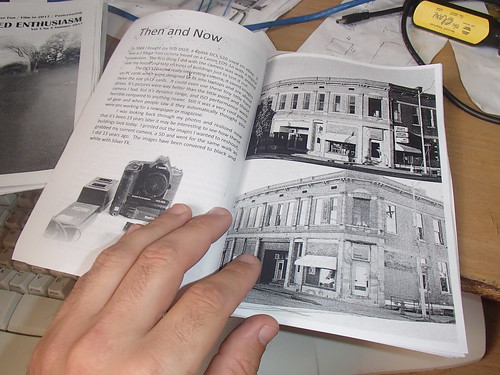 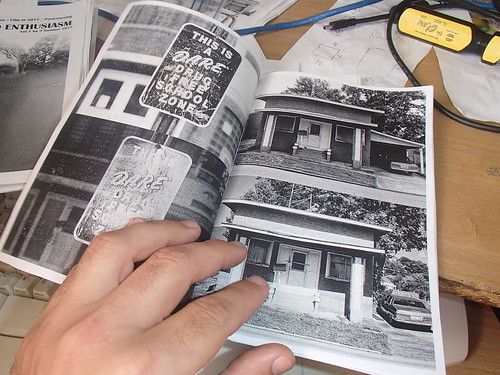 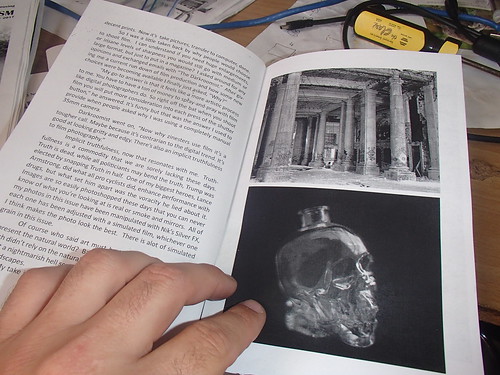 I recently contacted Blythe through http://www.wemakezines.com and arranged to trade some of my zine’s for a copy of “Applicant” by Jesse Reklaw.  I sent her my the 4 zines I’ve recently completed, Branson Sucks, Fake Lomography, Fields and Rural Route Four.  I sent so many zines because Applicant is a very nice zine made by a professional publishing company but also I just wanted to send out all my zines.

Blythe created a really cool envelope for Applicant printed with the Cincanatti skyline and with little stickers spelling out Applicant, in some ways I like the envelope better than the book.  She also included a couple postcards from Microcosom publishing, a sticker and hand written note.

So Applicant was a handmade zine that Jesse created when he found a bunch of old application files for students looking to earn Ph.D. in biology at an Ivy league university.  He pulled their photographs and unflattering quotes about them and constructed a small zine.

It’s very funny, and very telling about the way that we are judged.  I was especially amused by the highbrow “doctoral” language used, like how often have you looked at someone and said, “There’s a real dillettante.”  I’m also a bit put off by the publishing of this work, these are real people, these are confidential files, and while no names are used and these people probably couldn’t even be recogonized from their photos I’m still find this zine a bit dubious.  I don’t think I would have published it, but I got a kick of out reading it, so I guess I can’t be too judgmental.

Thanks for the trade Blythe!

I’ve been working on photographing some old film.  First try was with point and shoot that has macro and lit it with my tablet.  The pixels from the tablet show up really bad.  Second attempt was with dSLR 50mm lens and extension tubes.  Not very professional but I actually like the gritty look.

I recently contacted Ken Bausert and requested a trade and he was happy to do so.  I sent him my two photozines, which may be more accurately called chapbooks, and he sent me the last two issues of his perzine, “The Ken Chronicles.”  Though I’ve been interested in zines for a long time I’m really very new to them and I was very intrigued by the idea of a perzine, or personal zine.

By their nature it seems most zines are “perzines” in that they are usually written and edited by one person and contain their personal beliefs and what not.  What I think perzine really indicates is that this isn’t a zine about queer culture, punk rock, political anarchy, or all the other racy subjects that most zines address.  This is more like your relatives blog.  I was skeptical if I would find these interested.  Though I’ve been writing a blog for nearly 10 years I’m terrible at reading other people’s blogs and I didn’t expect Ken’s Chronicles would keep my attention.

Wow I was wrong…

So the zines are 24 pages not including the cover, laser printed with some color photos and saddle stapled.  The first page is a business page and includes the volume information, table of contents and a letter about the issue from Ken.  It’s really laid out much like a professional magazine.

Once I started reading I found myself really drawn in.  The letters section gave me the idea that Ken has a strong support base and that this zine is more than just some stapled together paper.  I really enjoyed the “What I’ve been _____________ Lately?” which gave me a few good ideas for some movies I might like and the zines section which I found very interesting.

The next section gave us an update on Ken’s winter in Florida as this is the May issue it covers the three preceding months.  I really enjoyed this section which was really just mundane events that happened, like meeting a guy at a car show who also learned to play piano latter in life.  There were some great color photographs also in this section.

So why did I lay in bed and read these front to back, even though if this was a website I’d probably glanced at it for a minute.  Part of the problem is how distracting the web is, it’s hard to focus on one thing when you have literally a million things to choose from.  It could also be how clean the layout is, it’s very well printed and easy to read, there are no flashing ads, pop ups, and other annoying stuff.  There is the fact that being on paper makes it feel much more important. Then finally there is the simple fact that it’s good, it’s well written and even though Ken’s Chronicles aren’t flashy, edgy, or even that exciting, I found them very interesting.

Also from anyone who wants to see what a successful mature zine should look like you should check out The Ken Chronicles.

I really felt like I’d kind of ripped Ken off, my two 8 page microzines for two of his 24 page zines.  I sent him a preview copy of another zine I just finished and will be sending him future zines that I make as well.

Ken sells his zine for 3 bucks, or 10 dollars for a year.  He can be reached at

My goal is to purchase and review a new photobook or photozine every month.  The first that caught my attention was Julius Smit’s “Tramp.”  There were several things that drew me to Tramp.

Honestly I’m surprised this book could be sold for 2.69 cents, it’s good quality paper, constructed well and I can’t image it costing much less then that to print.

So Tramp’s theme is the paths that people walk, the landscape and sights that become so familiar that people don’t notice them.  It contains 25 images, two poems, and some introduction text.  I will not comment on the poetry as I am less than an expert, I’ll just say that the poetry didn’t really connect with me.

I will comment on the photographs.  Reviewing and judging an experimental art book is kind of a precarious thing.  Experimental is all about breaking out of the norms, and what not, still when I see a photograph that bothers me it doesn’t matter, it just doesn’t seem right.

There are a few photos I find very compelling in this book, My favorite is a group of people walking to a seafront in a very dynamic composition.  I loved a two page spread with a poem and photograph of two fence spikes that complement each other.  There is a great image of the word “playing” that fits very well.  I also am very fond of an image of a stone wall that is very much impact.

On the other hand some of the photos in this book are just flat, they lack contrast, a hook, an interest.  I think part of the problem is the black and white conversion process.  I’ve looked at Julius’s photos online in color and found them better, but they often didn’t translate well to black and white.   I found some questionable composition choices in a few of the photos. as well but those are debatable.

I received this book on a day that my wife was undergoing an outpatient back procedure at the hospital.  I tried to absorb the work while sitting in a small waiting room with a TV wailing “Dog the Bounty Hunter” at volume that was beyond loud.  In short order I gave up and retreated to the main lobby where there was a level of civilization.  Perhaps “Dog” tainted this book for me.  Perhaps not.

This was my first trade last year, I sent a fellow by the name Olive Booger a print and my first zine which was entitled “Artifact” and he sent me these two photozines.  “Lone Star” is comprised of photos taken around Houston and San Antonio Texas in 2008.  The second book is called “Hiking Saftey Tips” and is nearly identical in style and design but the photos are from Arizona in 2014.  I felt bad because his zines were far better then the one I had sent, plus he threw in a little sticker.

The zines are both photocopied and put together very well.  Olive was just visiting the areas but his photographs are the exact opposite of the usual tourist snapshots.  The photos in both books show the keen observations of a person taking in a foreign culture.

Back when I shot film I almost bought one of those toy cameras several times but always talked myself out of it.  If I had one it would be collecting dust somewhere.  Lomography is something I find kind of interesting, I like the randomness of the images, the spontaneity and all that.  I’ve been interested in exploring analog effects in Photoshop and looked through my archives for pictures that I believed could be made more interesting if they were “lomographied.”

The second edition of Unbridled Enthusiasm is a collection of some of these photos.  As usual it will be limited to 50 copies and signed.  It’s currently available for trade, so comment if you’d like to arrange a trade.

This is an 8 page photozine that I make a couple times a month.  This first issue features a trip my wife and I took to Branson MO in 2008.  We were both a bit let down by the area, though I’m not sure what we were expecting, it is the Las Vegas of the Midwest.  Anyway, the zine is available for trade so just comment if you’re interested.